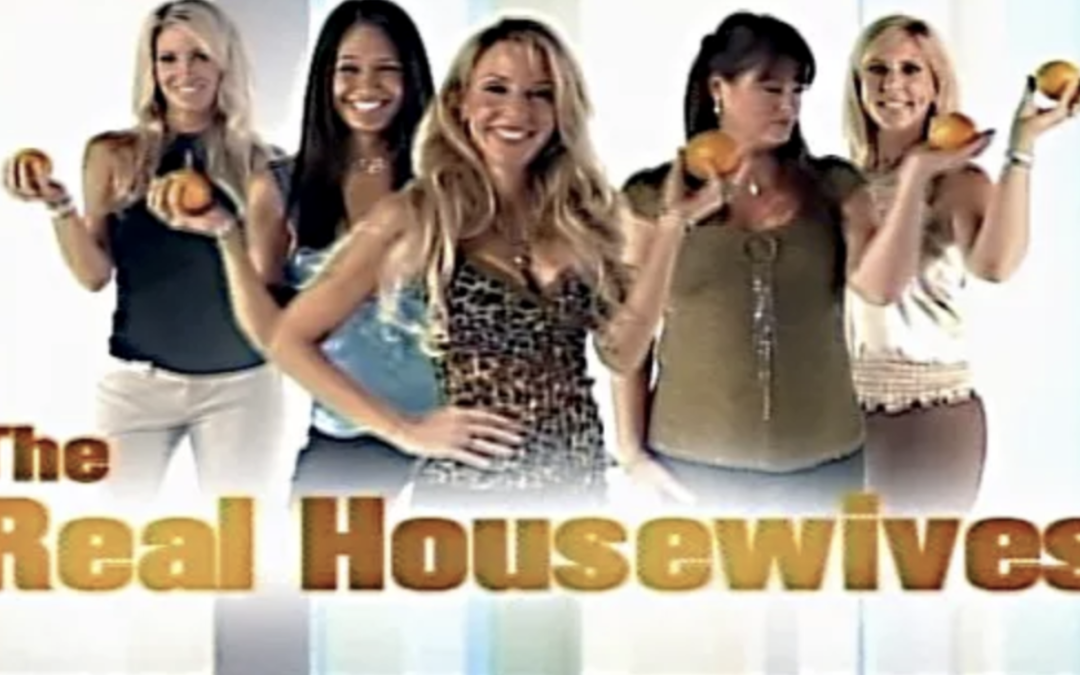 set in the largest and most affluent gated community in California, Coto de Caza. They board Arabian horses, have an Olympic pool, full basketball court, eighteen-hole golf course, and a myriad of tennis courts. The houses range from three to thirty million dollars.

After directing the pilot and segments of the first three shows, I received a letter from the Directors Guild. It read, “You are directing for a non-signatory. You must insist the production company become signatory to the DGA, or you must quit.”

I didn’t need an excuse to quit. Bravo, the network that commissioned the series,  was coming down hard on Scott to make the show a “fly-on-the-wall documentary.” People who produce reality shows force situations and confrontations upon the “real” women they follow to ensure something catty will arise when the characters get together. Bravo’s core audience is women and gay men, and catty is their métier.

The show is the biggest hit in Bravo history. It spawned ten more seasons and spin offs in New York, New Jersey, Atlanta, Washington D.C., Beverly Hills, and Miami. Bravo’s popularity grew exponentially, from two million to twenty million viewers. Scott was never mentioned in the numerous articles written about the show, despite his being charismatic—a natural interviewee.

Scott and I spoke about the show’s success and the amount of queries he received for press interviews. The question in both our minds was, “Why is this show so popular?” The women were superficial, lousy parents, and shopaholics. My answer: “Half the viewers can feel superior because they hate them. The other half want to be them.”

Bravo assigned a “show runner” to mastermind the show’s episodes, even though this was a “fly-on-the-wall documentary.” He was gay, which Bravo thought best to write about catty women. But he was delusional thinking that he could fit in in right-wing, homophobic, Orange County.

The biggest laugh Scott shared with me concerned the show runner. Scott told me, “This show runner wants to meet with Matt. He thinks they have a lot in common.” Matt was married to the most central housewife, an ex-playboy Playmate I had directed in a bit part in Off the Wall when her name was Jeana Keogh, neé Tomasina, the girl in the ZZ Top music video, “She’s got legs.”

Matt was formerly a professional baseball player. He pitched for the Anaheim Angels and Oakland Athletics. He had to retire when he was hit in the head by a fly ball while sitting in the dugout. Matt was the last person the show runner would want to meet. The reason he told Scott that he thought he and Matt would get along was, “We’re both small-town boys from the Midwest.” The show runner was small, never played sports, and was as bland as vanilla. Matt was big and bombastically opinionated.

Scott was so depressed about the way the network treated him, he was nearly inconsolable. I tried to make him laugh. I explained to him my theory about Hollywood: “It’s all about credit and blame. If the show hits, they take the credit. If it tanks, you take the blame.”

This is akin to the parable about the scorpion and the frog: The scorpion hitches a ride across a river on the back of a frog. Before they land, the scorpion stings the frog, and they drown. With his dying words the frog asks, “Why did you sting me?” The scorpion answers, “Because it’s in my nature.” So goes the ways of Hollywood. It’s in their nature to backstab, and they would say it just as matter-of-factly as the scorpion.

The head of NBC’s alternative programming, himself gay and first to tell you so, takes credit for creating The Real Housewives of Orange County. He even has his own show about the show.

The suits will take advantage of you while smiling in your face, telling you how much they love your work.

Reality television is about conceiving and manipulating reality. If it’s successful and people watch it in droves, someone else will take the credit. If it fails, whether or not you are at fault,  no matter how good a job you did, you take the blame.