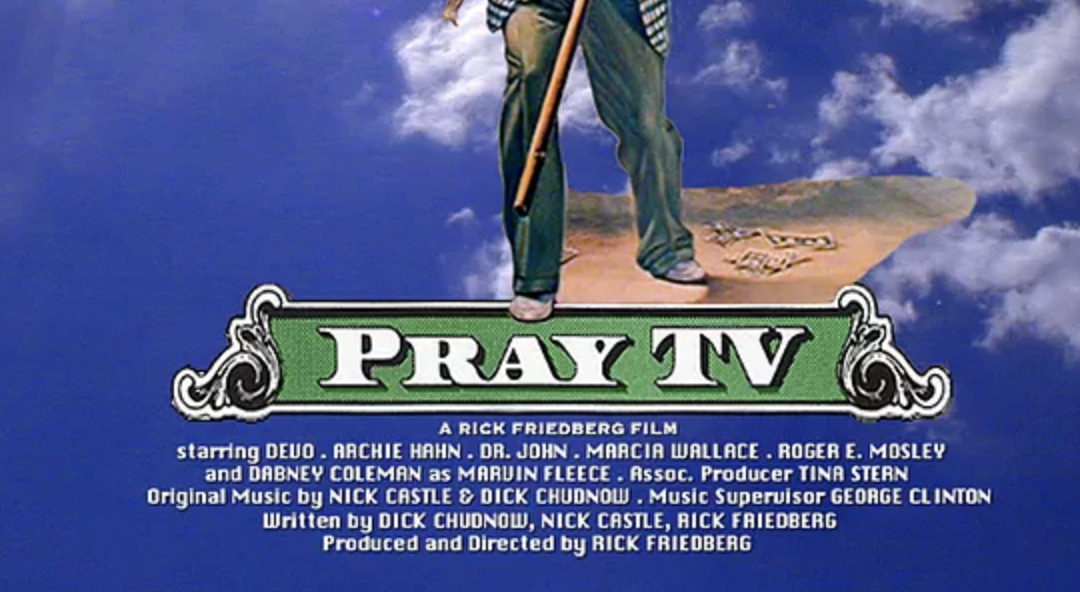 Charles Champlin, former critic for the L.A. Times, chose my first feature film, KGOD (aka Pray TV) as his entry into the USA film festival, a critics-only festival. He wrote in the Times:

“My pick this time was Rick Friedberg’s spectacularly irreverent Pray TV, an outrageous satire      on televised religion, it leaves no pitch unscratched, and the festival audiences cheered it.”

was such a hit at the festival., the distributor decided to test market it by screening it to a paying audience in Columbia, Missouri, heart of the Bible Belt, on Easter weekend. This was my Sparta. As Frank Sinatra put it in song, “If you can make it here, you can make it anywhere.”

I thought, Here I go, winging my way to a place most popular with fans of religious right-winger Jerry Falwell, in a section of the country filled with creationists who are pro God, pro guns, anti gays, and anti abortion.

I was sent down to do radio and print interviews to hype the film. No money was spent on TV commercials, which is the only way to sell a movie. Any other method, like me warning the media and then shaving my head like a Tibetan monk and painting Pray TV on my shaved scalp while sitting in the main intersection of town and setting myself on fire, would fall short. Although I think the distributor would have backed that idea—especially if I followed through with the fire part.

No movie gains a potential audience without TV commericals and, also now, advertising on the Internet. A lesson to be learned: If you don’t open your movie to a packed house, it will end up in the toilet. That’s why you see a barrage of TV commercials for new movies before they come out—they have to open.

One solution would have been to kidnap the head of distribution, throw him in a rat-infested hole, and waterboard him until he agreed to spend money on TV commercials. But I hadn’t heard about waterboarding then. The up side was that Columbia is a college town. I did radio interviews with the top local rock-and-roll stations. I figured that youths who listen to rock and roll exercise their freedom of expression from the religious right.

Irony of ironies, the film sold out. The audiences loved it. Here’s what the campus reviewer wrote:

“Friedberg is a young director with a great deal of talent. His masterful marshalling of the              visual field is more Italianate than American. Several sequences have the garish surrealism of      a Fellina Roma and give the  film the air of a working class Satyricon.”

Pretentious as this review might read, I knew I had a potential hit film for college kids.

Because they were cash poor, the distributor, Orion,  sold their entire film library, including KGOD, which at this point they had retitled Pray TV, to HBO and MGM/UA Video. I called Jim Griffiths, then head of acquisitions at HBO, and asked him, “How’s my film doing?” He said,

“So far, it’s the best reviewed, most watched film of late night.”

“Then why don’t you play it in prime time?” I asked.

He laughed and said, “You kidding? A film that knocks religion?!”

HBO was not yet the groundbreaking sophisticated network it became. Later, I ran across a            blurb on the Internet entitled “A Little Gem Before its Time.” Here’s the review:

“Pray TV is a dark little comedy about religious broadcasting.  The sketches in Pray TV are very      funny and often very surreal. One of the taglines for this movie is “If you don’t have a sense of        humor, you don’t have a prayer,” and this is quite true.

Pray TV is a fun little movie, definitely worth watching.”

Determined to circumvent Orion, I had a series of screenings for other studios to have them distribute the film. I learned so much about the pain of screening comedies from reading Ralph Rosenblum’s book When the Shooting Stops, about editing for Woody Allen. According to the book, Allen was inconsolable after seeing his first film but Woody’s manager told him to phone Mel Brooks who advised,“Go out on the street and find real people to see your movie.”

Rosemblum and Allen went to a theater in Greenwich Village and pulled people in off the street to screen the film. And the laughs were there. The moral of the story: “Show the film to people who you think would pay to see it.”

Something else, unique to comedies, I learned, is what kind of theater is most conducive to comedy screenings—not narrow and deep but wide and shallow, so that the screen envelops the audience; not too air-conditioned and not too warm—nothing to distract people from their comfort zone so they can laugh.

The theater must be packed. Never screen or have your movie screened to an empty house. It’s just too intimidating an environment, even to those few that laugh. They look at their neighbors and inhibit themselves from guffawing, lest they come off as low-brow buffoons. I’m sure its no different for stand-up comics or auditioning actors.

Performing, pitching and showing your work, playing to an empty room is death. Never do it.